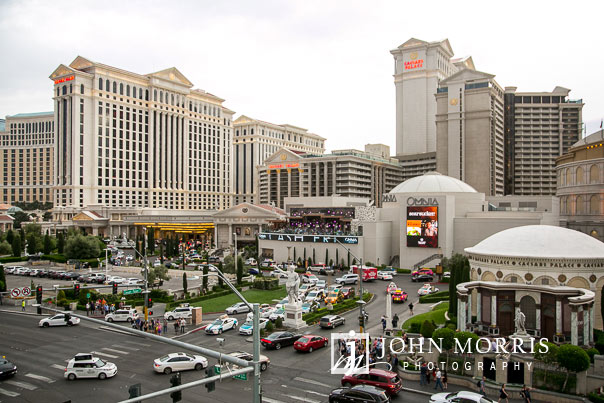 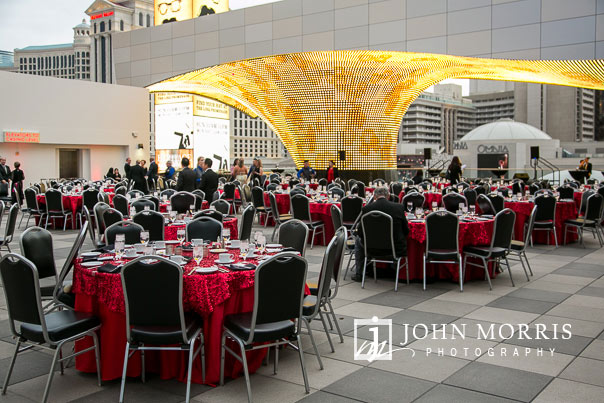 I am a Las Vegas trade show photographer with over 15 years and thousands of show under my belt. So I’m going to try to shorten some of my tips and tricks blog posts. I still want to share my experiences and insight into how I approach trade show photography, but maybe I can do so without writing a novel every time. Having said that, let’s get to it!

I want to highlight one particular Las Vegas trade show that created a unique lighting challenge and how a simple approach was able to solve the problem. First, it is important to recognize that a challenge exists and what that challenge is before you start shooting. So, arrive early, scout around, and give yourself time to check things out to identify any issues that may get in the way of you capturing the photos you are hired to get.

In this case, I was tasked with shooting in a fun, outdoor location overlooking the Vegas strip. The trade show was rooftop and across the street from Caesar’s Palace. I arrived a little early to capture the setup knowing that the available light would be mostly gone at the time I was scheduled to start. And as you can see in a few shots below, once it got dark, the details of the table setup and overall beauty shots would be lost to the night. 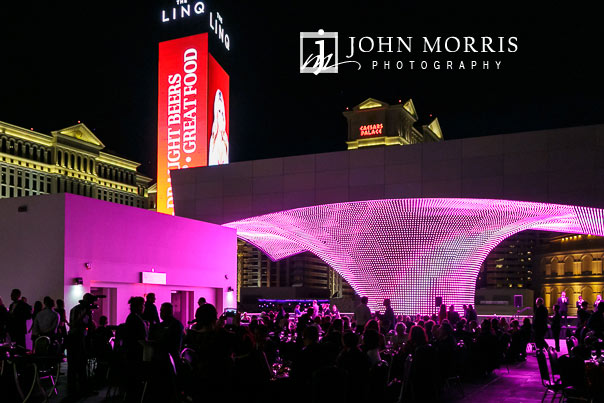 Have you identified any concerns from the first couple of shots that I have posted? It might not be as obvious in a still photo series, but the beautiful light under the canopy continuously changes colors. It was a fun and unique feature of the venue. In the shots provided, you can see at least four different colors from the canopy and you can get an idea of how those colors are going to look on people. While beautiful, they are not very flattering.

And therein lied the challenge for a Las Vegas trade show photographer. The stage was positioned directly under the canopy. 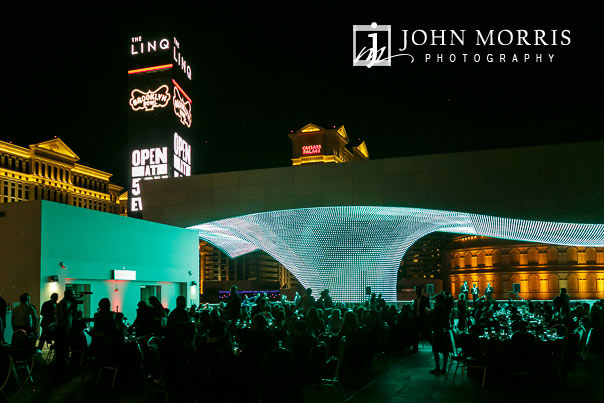 One of my favorite local performance groups is this particular group of guys who do an amazing job of impersonating the Rat Pack from Vegas’ golden years. Frank Sinatra, Sammy Davis and Dean Martin. Not only do they look the part, but they sing and sound like them to. Three very talented guys who are not only professional but also fun to work with too. It’s always a pleasure to work with them. 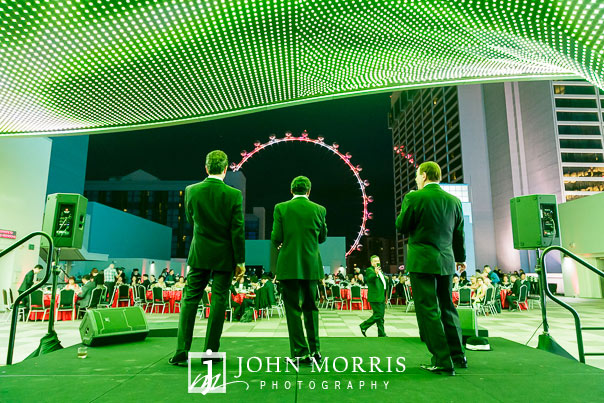 As you can see in the first behind the stage shot with the green cast from the lights, the guys are very green. Though not shown, it was the same with the magenta lighting, blue lighting, and gold lighting. Kind of obvious but just the same, very hard to color correct, even in post. Upon observing the lights before the show started, I figured that I had three options.

The first option which was not an option at all, was just to shoot it as is and hope the client didn’t notice? After all, the lighting is what it is right? Like I said, not an option because they are paying you to solve problems. That’s what we do.

The second option would be to use flash, either on or off-camera to overpower the colors of the available light and replace it with predictable flash which we can color correct for. This was something I considered and was prepared to do because not only was the Rat Pack performing, but the CEO and several company reps would also be speaking from the stage and I might not be able to employ my chosen solution with them. 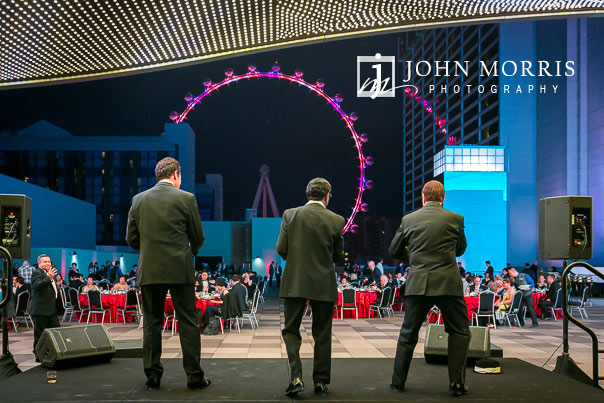 So what did I do? My solution, in this case, was the path of least resistance. In the images of the guys that look most natural, I simply waited for the lights to change to this color of light and then fired away while I had the chance. The lights followed a predictive pattern and cycled through the different colors and this “natural look” just happened to be one of them. Something I had observed when I arrived to scout the area early on. The light would stay this color for about 30 seconds before changing to one of the more colorful options and because the Rat Pack’s performances tend to last at least 30 minutes, I knew I would have the time I needed to capture enough quality images to tell the story and satisfy my client. 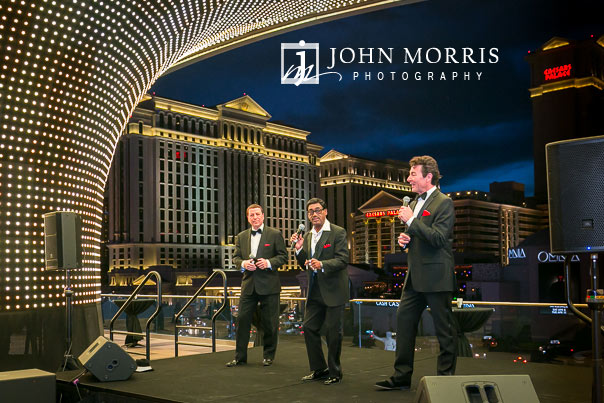 Just to demonstrate the second option of using flash to overpower the colorful lighting, you can see in the second to last shot of Dean, that I have applied fill flash to the image while the overhead lighting was a bit on the gold side. This is similar to the lighting technique I used when the CEO spoke. His time was much shorter and I couldn’t wait for the light to cycle through or I would have missed much of his speech. Of course, I still shot like crazy when the light was “right”. While the use of flash was acceptable, obviously I much prefer the shot above without the fill flash. 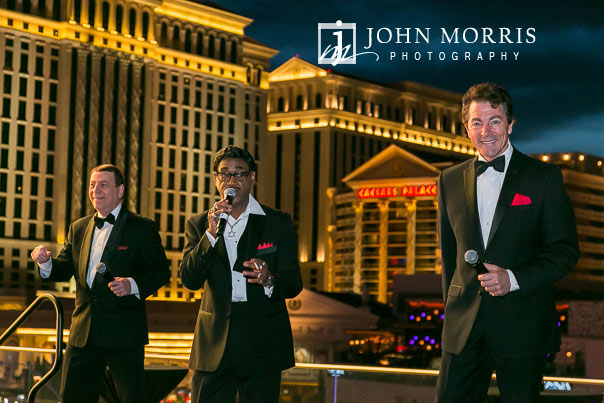 As an extra bit of info, how lucky to have Caesar’s Palace lit up behind the stage as a dramatic backdrop from the front, as well as the Las Vegas High Roller in the background when I shot their silhouettes from behind the stage. A truly great location. 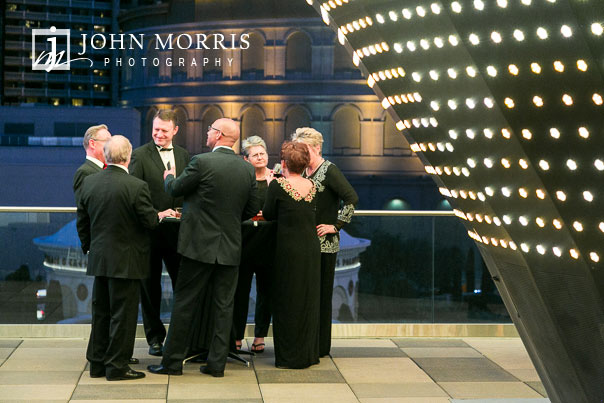 Using the lights also helped in shooting candids of the event as you can see in the shot of the attendees networking in a group at the cocktail table in the second to last shot. 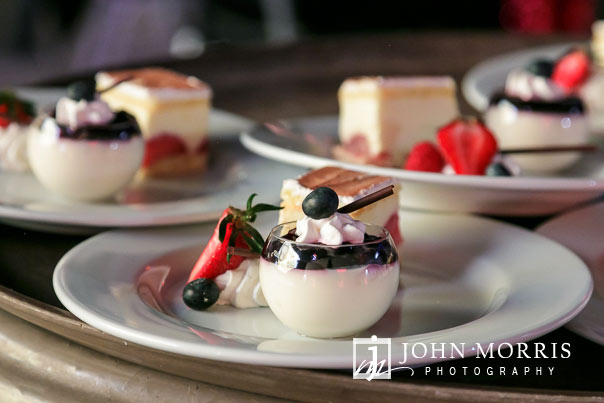 Finally, I added a food shot. The dessert trays that the servers were staging from just happened to be next to a white wall. I simply pointed my flash slightly over my shoulder to the left and let the light bounce off it and back onto the subjects creating soft and directional light to bath the desserts in.

A simple problem, simply solved. As a Las Vegas trade show photographer, sometimes we don’t have to employ any tricks from our bag to get the best shots. Many times, simple observation and a bit of creativity will work wonders in helping us create the images that make us look like the professionals we all strive to be. Until next time…..

Take a look at some of my trade show work here

Now based out of San Diego, John Morris has been a successful corporate event photographer in Las Vegas for the past 15 years. John also teaches and coaches photography and business to aspiring photographers.